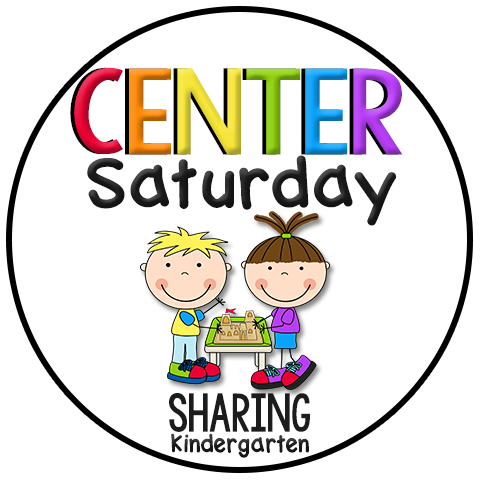 I am a day two late and a dollar short on Center Saturday.
The family went to the county fair and had a blast…
I ate part of a funnel cake…
and hubs grabbed me a RED VELVET funnel cake to try as well.
It even had cream cheese frosting drizzled on top!
{It was good, but too heavy for me.}
Apparently the baby, E, get motion sick.
So… uppers… she lost it all at dinner.
So I had to hold off on feeding a hungry baby for a few hours to make sure her tummy was settled.
She was less than happy.
But she wasn’t sick anymore.
Fun mommy moments.
Any who…
This week we learned about the Letter Mm, numbers 8 and 9,
building number sense, and apples.
We used the book, If You Give a Moose a Muffin.
This week was my first time EVER doing all math centers.
{I have read many books and I have read many blog all about Math Stations,
Math Center, Math STUFF… but you know me…
I have to do this my own way…
I am generating and working towards this BIG idea
I have to make this math centers idea work in my classroom…
so bear with me a little longer.}
Okay… back to it.
Yellow Table was matching the monkeys in the trees to the trunks. 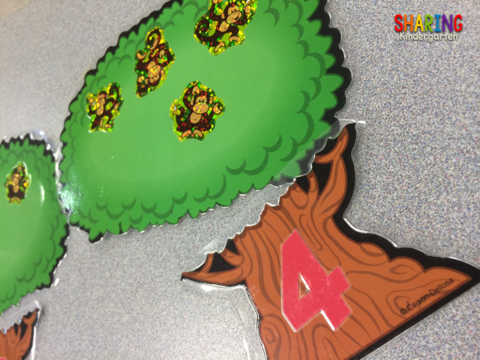 I took Carson-Dellosa Accent trees and attached some monkey stickers to the tree.
I also added a number to the trunk.
I cut the tree apart and laminated it.
After cutting it out again… this center is ready.
Check out another picture of this center. 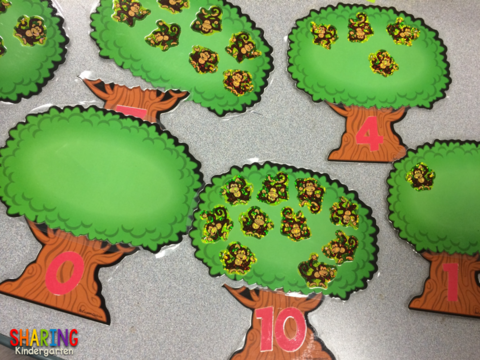 The Orange Center learning activity is this Apple Sorts Shapes, which is part of this bundle. 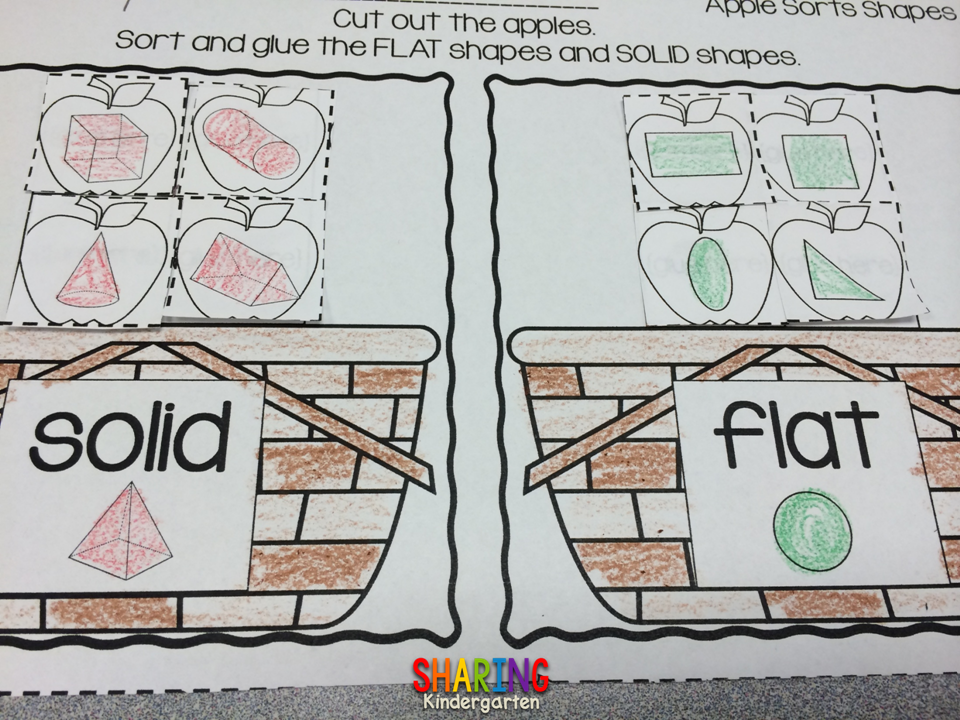 Here is a student working on their activity. 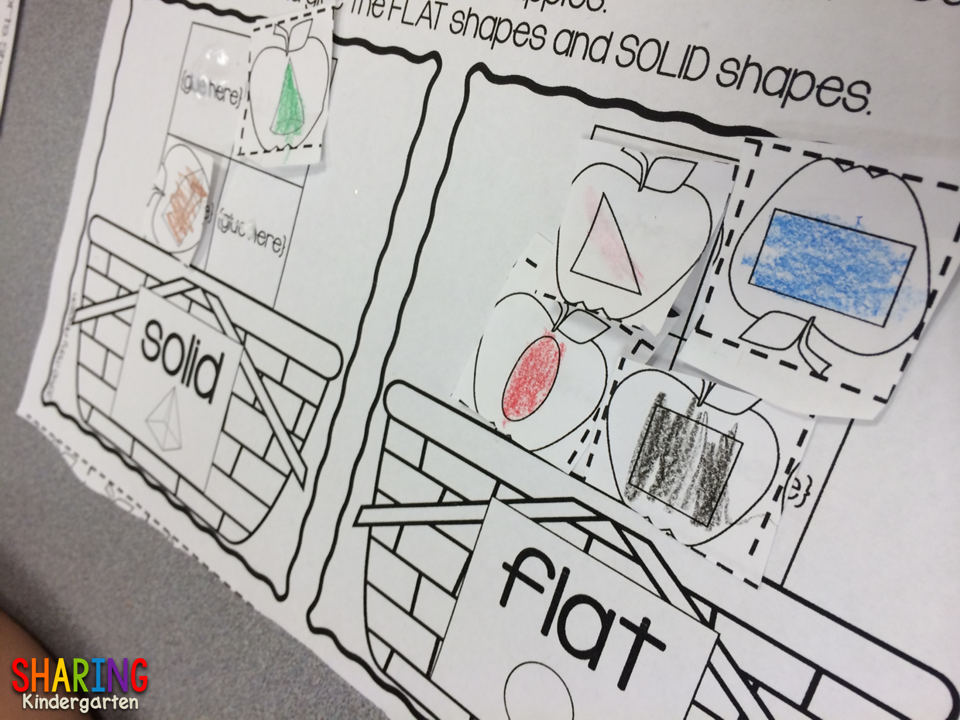 The Red Center was a FUN monkey and barrels sorting activity as well. 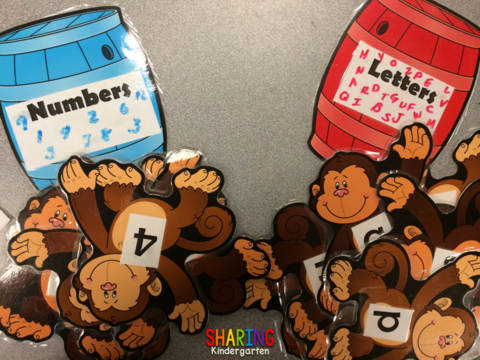 I prepped two barrels with a number sign and a letter sign.
I also labeled monkeys with letters and both capital and lowercase numbers.
After the typically lamination and cutting out… I had a engaging sorting activity.
I did add the numbers written in blue and letters written in red
on the TOP of the lamination with a Sharpie.
Why… I can take them off if my students don’t need this support this year or add them back if they do.
{You know you can color on top of a Sharpie with an EXPO marker,
then erase to remove permanent marker right?}
When I ask my students about this station, I make them tell me their numbers AND
I make them tell me their letters and sounds.
Purple Center was this Make a Pattern activity. 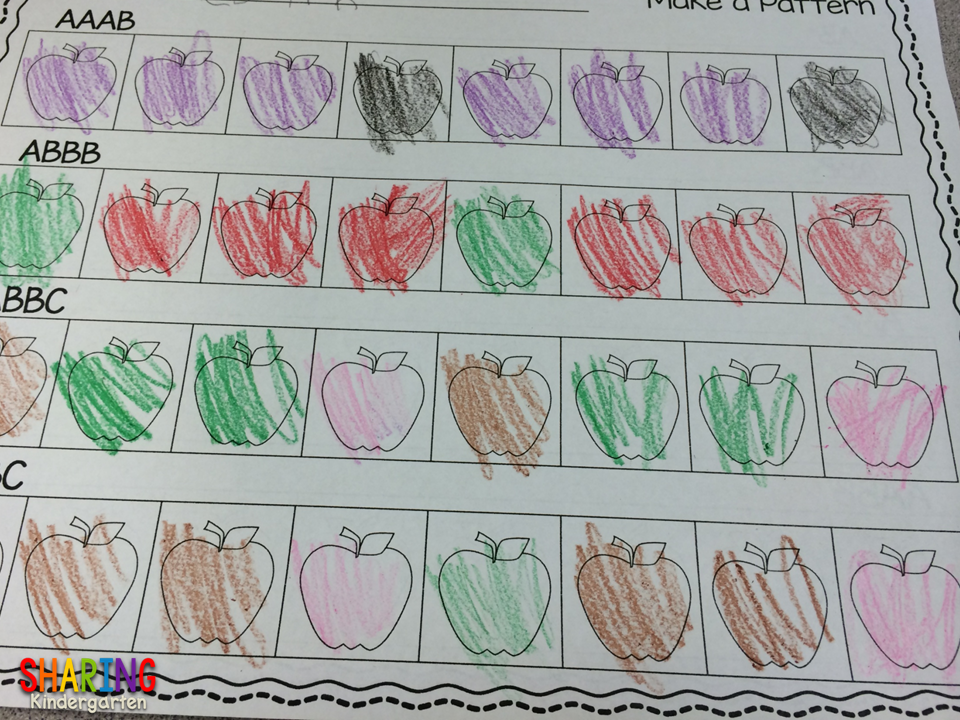 I copied both sides, but only asked my little ones to do one side.
For any pattern they missed,
they would have to complete another one on the other side!
My students LOVED picking their own colors 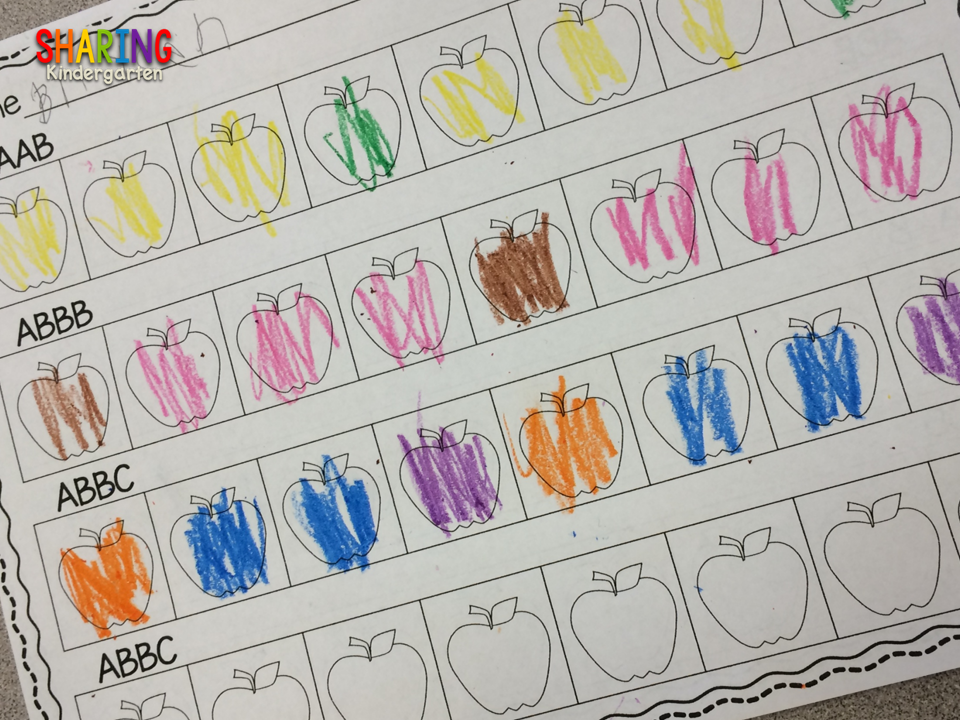 and doing this their own way. 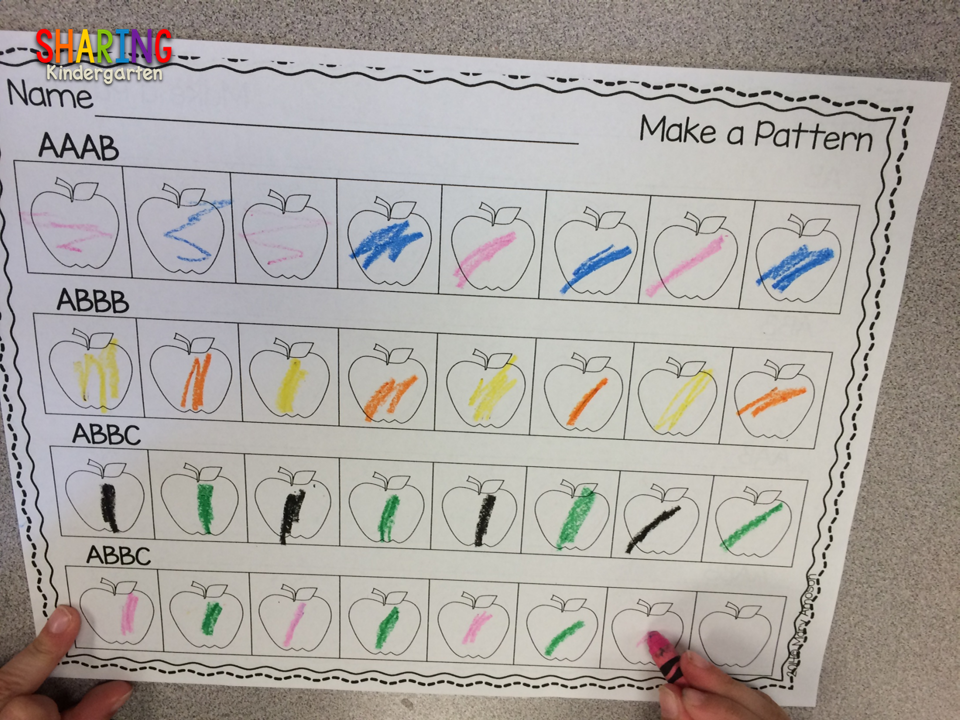 Even if it isn’t done how I want it done… as long as it is right.
Look at his one too! 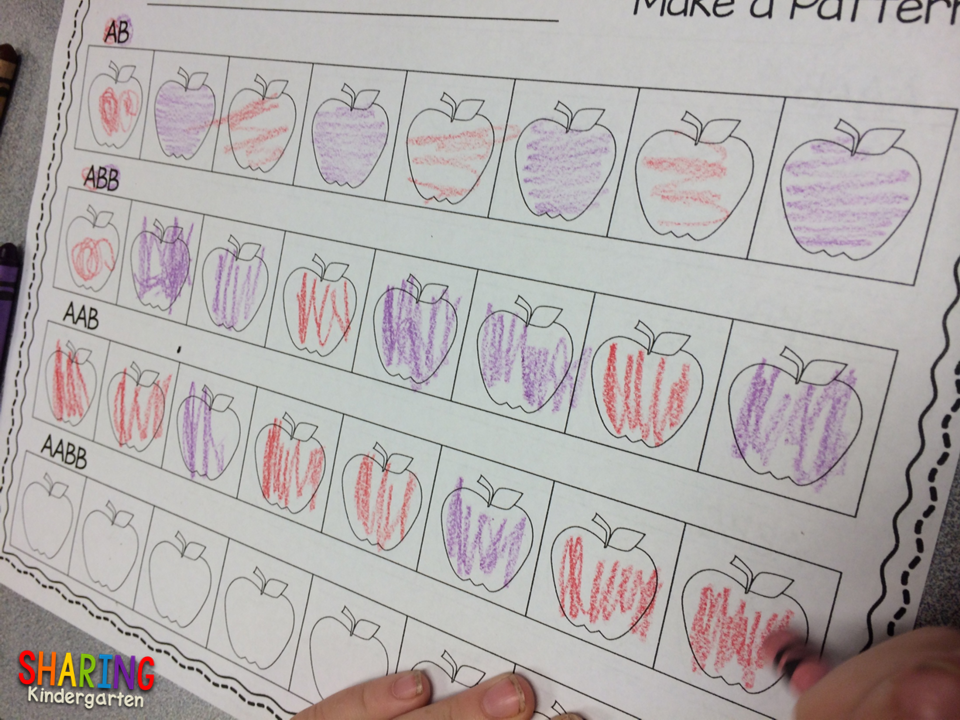 The BLUE table was the muffins.
There were two versions to choose from which always appeals to little ones.
This set of muffins needed students to count the ten frame and
write the number in the blank provided. 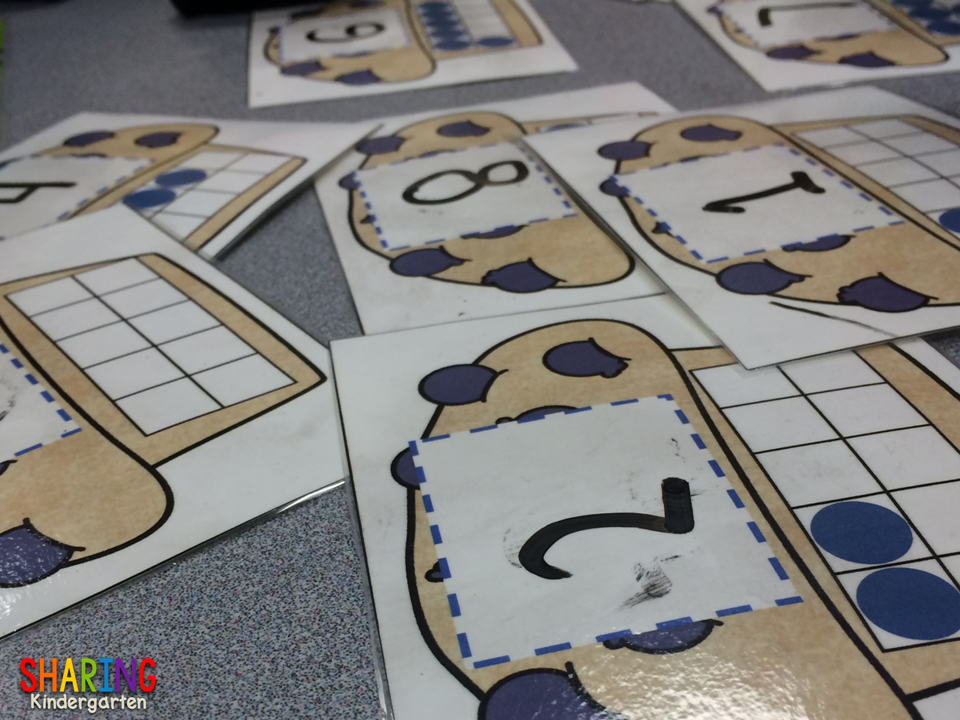 The other version gave my students the number in the muffin and
had them fill in the ten frame. 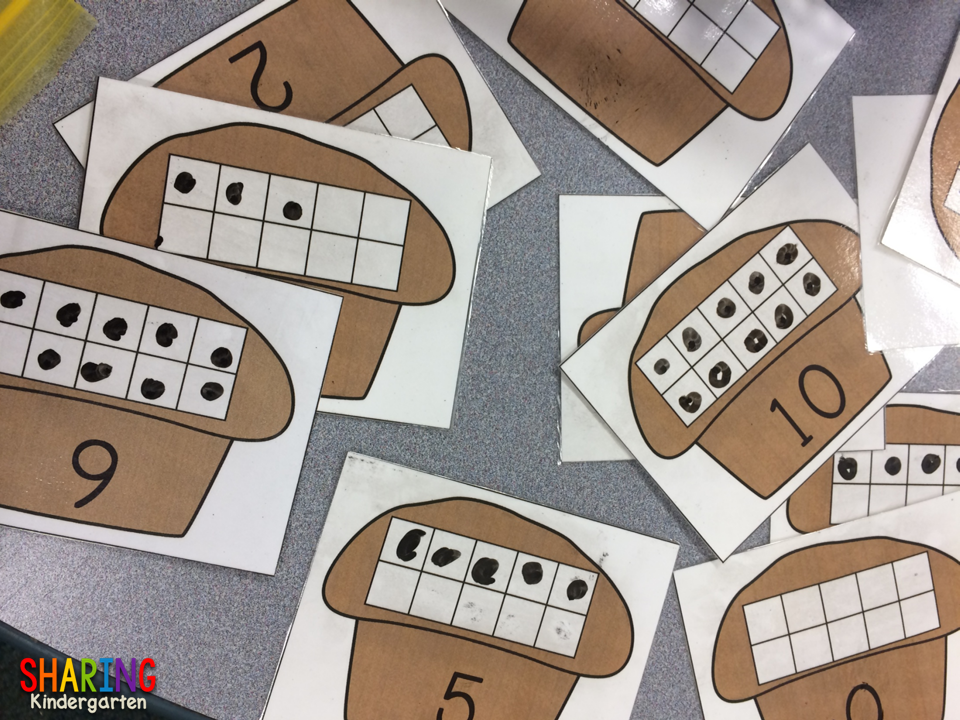 The GREEN table was so much fun because I gave my students
the ability to choose which of 4 card sets they wanted to use.
Here is an apple tree mat with numbers on it. 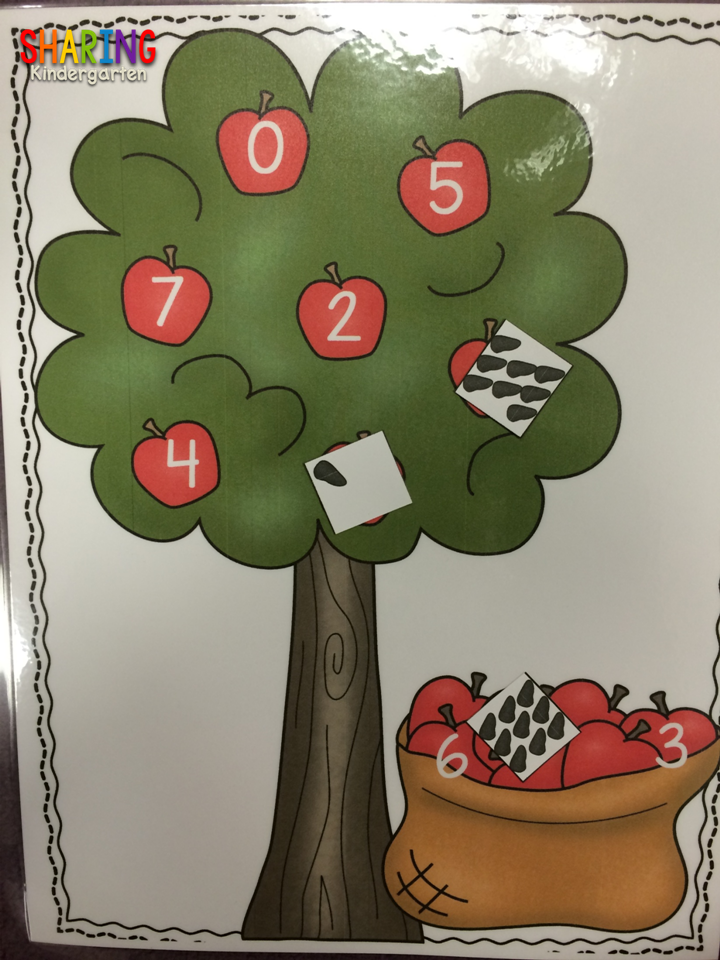 This card set has the student counting the seeds and finding the number on the mat.
Another version uses number words to match on the mat. 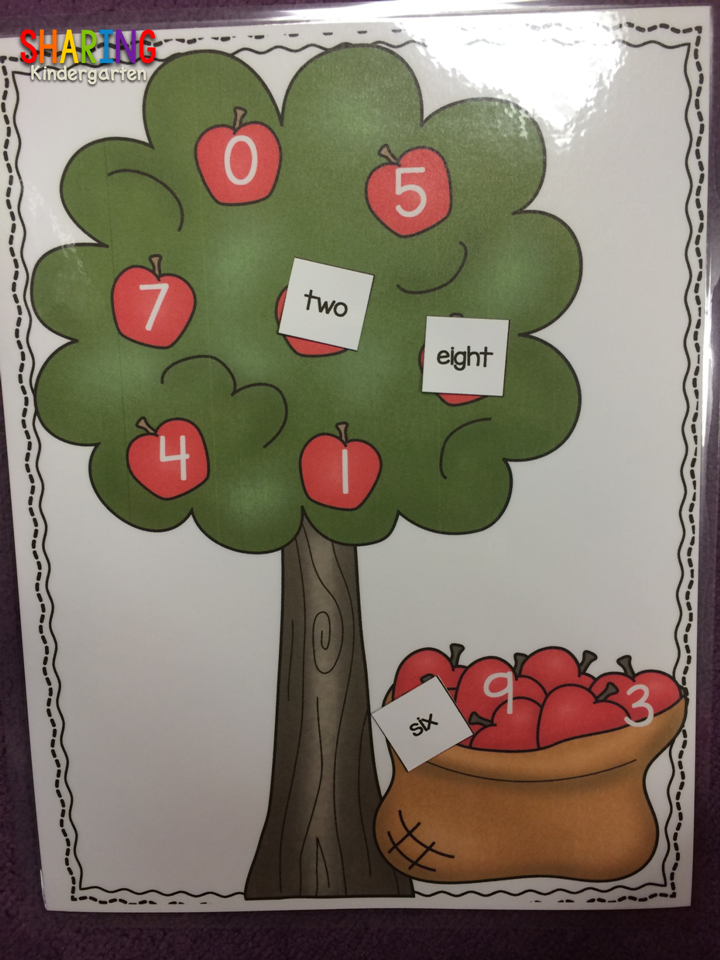 During center time, I also open many ‘play’ centers.
I am on a mission to make BETTER, more INTERACTIVE
sensory tables for my little ones.
This is my sensory center from this past week… 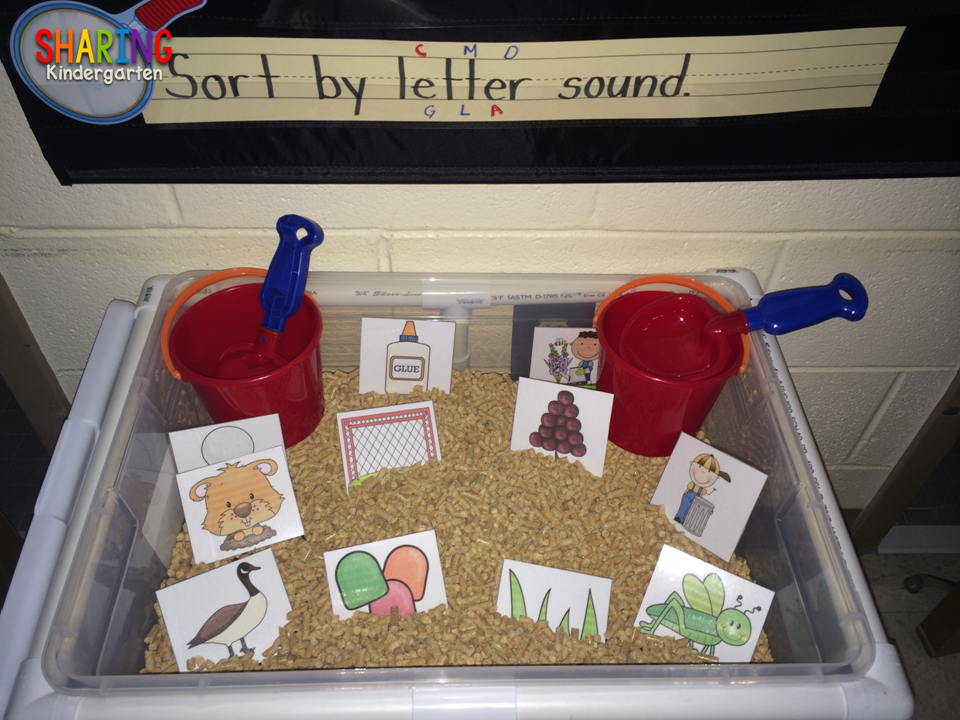 I set up mulch pellets in the bin with two buckets.
Then, I placed Gg and Mm picture words in the mulch.
I took these removable Dry Erase Labels from Avery and placed one on each bucket. 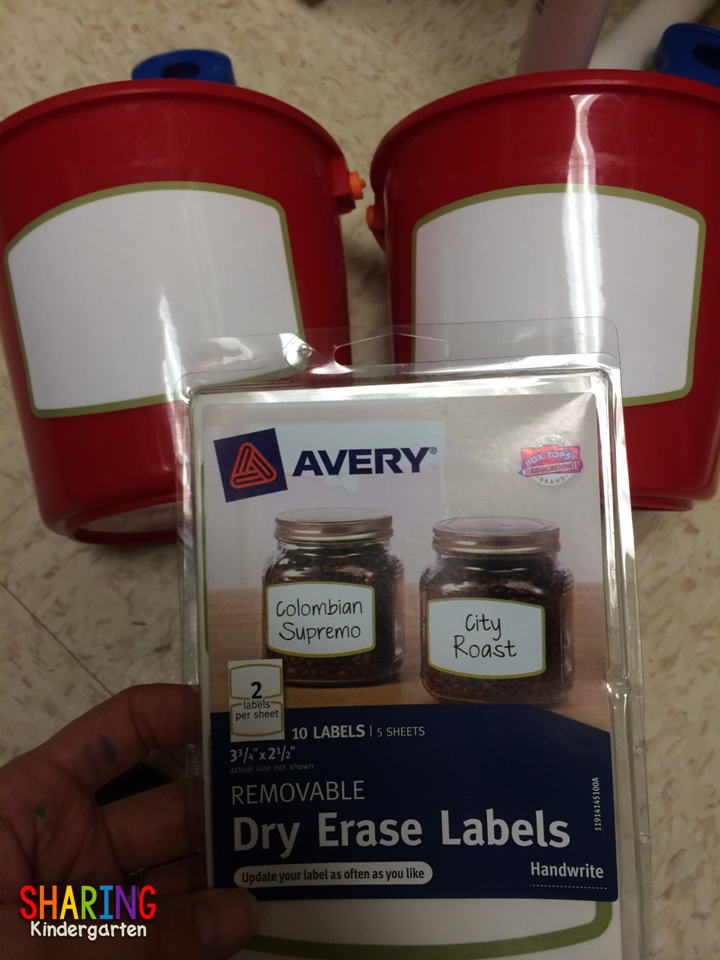 Then I wrote a Gg on one bucket and an Mm on the other. 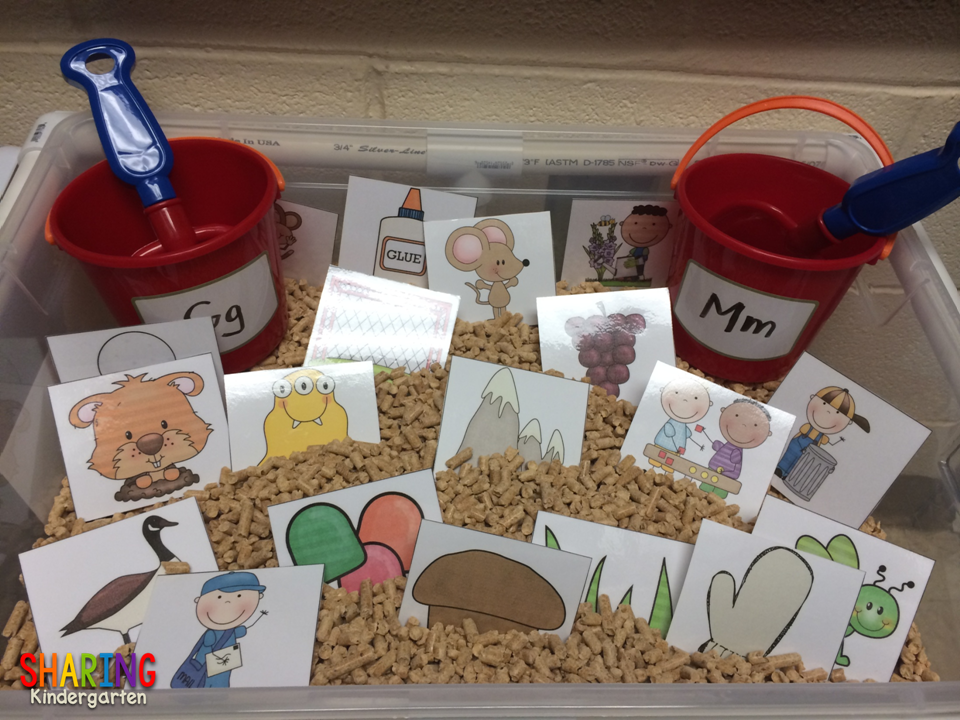 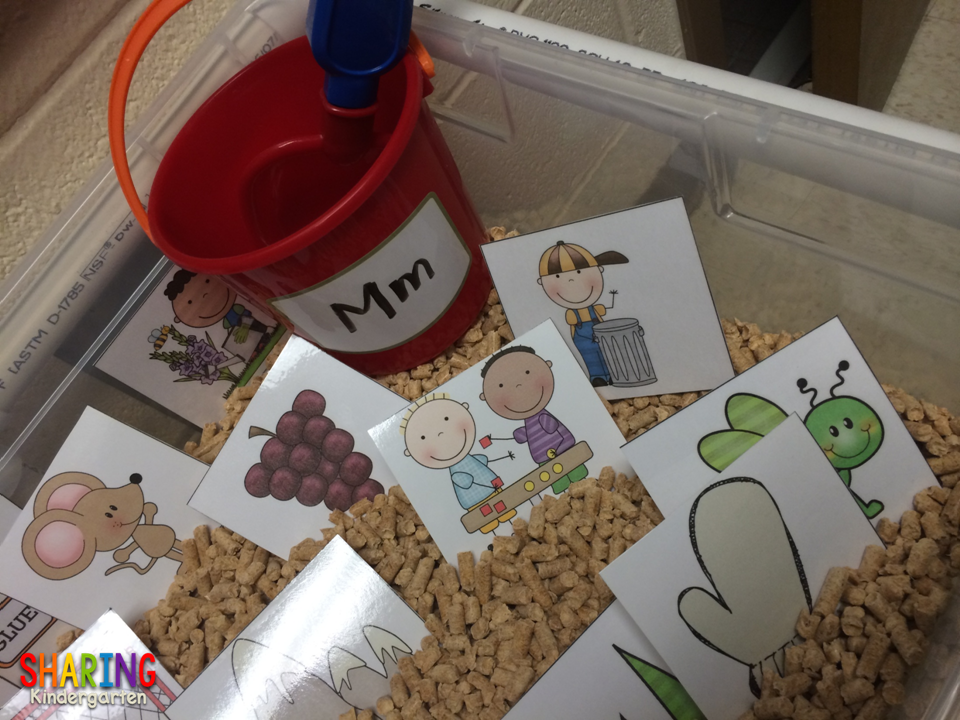 Overall, this was a HIT!

Some of my students used the buckets for sorting and
others added the cards to the black pocket chart.
And yes they scooped and shoveled and giggled too! 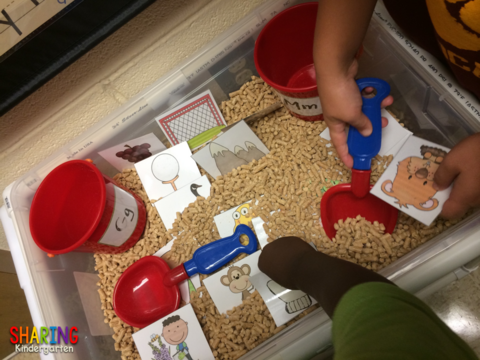 This center was not messy at all!
I did a quick sweep at the end of the week and
returned the mulch to the teacher I borrowed it from…
then rinsed out the bin.
It took about 5 minutes total to take apart.
All in all, I enjoyed the math centers!
I am adjusting to planning MORE math activities and
LESS other subject centers…
But I BELIEVE in myself… I CAN DO IT.
{Says the teacher who left school Friday at 6 pm!}