Guess what I don’t have? Time to waste in the classroom tracking everyone’s behavior and to be constantly rewarding those who are on track doing the wrong thing! Nor do I have time to constantly be correcting behaviors we don’t want to see. Time is the enemy and I think I show you how Class Dojo can be your BFF.

Class Dojo is an free app many teachers use to assist build and maintain a classroom community. Many teachers use it as a classroom management tool, like a techie updated version of the formerly popular clip chart system. Teachers can monitor specific behaviors, allowing students to gain or lose points. The parents have access to their child’s points as well. Teachers can also communicate with parents using the messaging component and teachers can share photos of classroom learning using the stories section of the app!

How I Started Using Class Dojo

This year I am working with a new team of Kindergarten teachers at my new school. One of our rules is to all use the same classroom management system. We voted and Class Dojo was voted as the first choice. I had to say goodbye to my clip chart and embrace the Dojo.
Since my school does PBIS, I wanted to find a way to use Class Dojo with the PBIS ideas. Once we were full swing into Dojo, I tried to focus on using Class Dojo for positive moments. My student would mostly earn points. One draw back was the communication with parents. Parents didn’t seem to understand the times their child was not earning points because they didn’t know how many were given out each day. Additionally, points would get reset every week. This seemed to be defeating to some of my students who worked hard. Lastly, I did not like how the number of points somehow labeled the students to everyone, including that student. 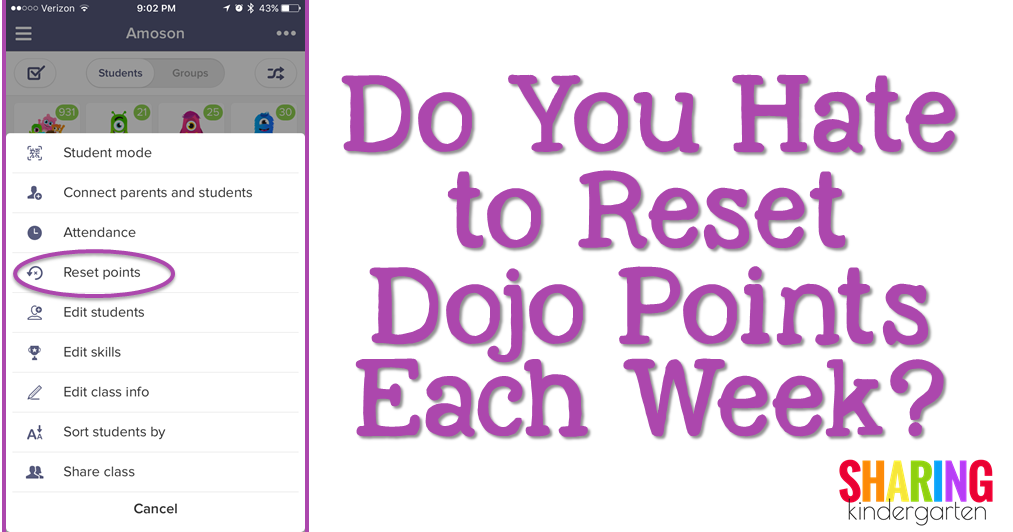 Digging In Deeper With Dojo

To remedy these issues, I attempted to set a goal of 20 Dojo a week. Students who earned this number of Dojos would earn an bonus chunk of extra recess. This idea gave parents the idea of how many Dojo were earned in a week and rewarded students who achieved that goal. Sadly, I felt my students who really needed more recess were often the ones who were not earning it. Again, points would be reset every week and the sigma of good and bad students seemed ever present.

I went back to the drawing board again. My parents wanted to know when their child was not earning points. I found myself being more negative on Dojo than I wanted to be. It is draining to focus on wrong choices. I also felt like parents were knowing too much. If you had a well behaved child, the parents were loving me. BUT if you had a child who is learning how to make good choices, I felt like it was overwhelming the parents with negative actions they couldn’t control through the school day. 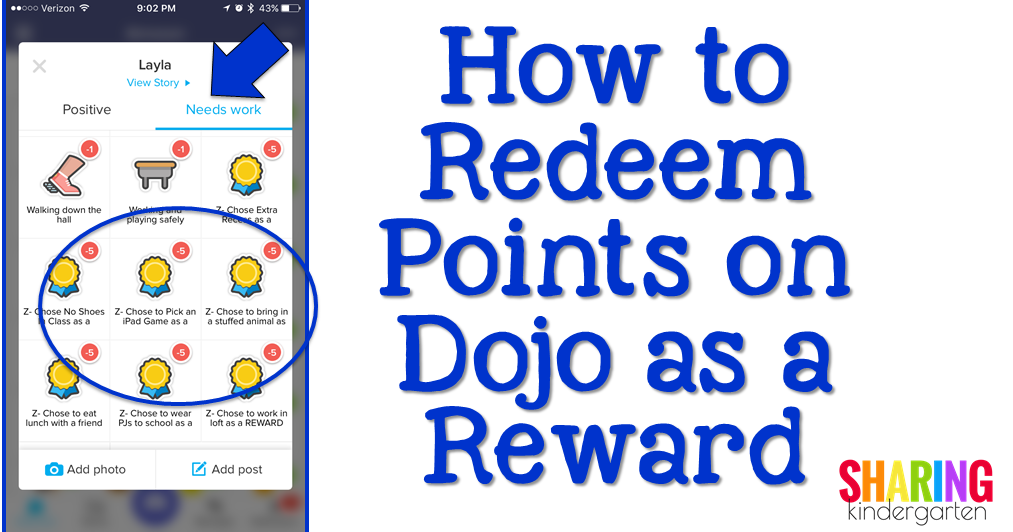 I knew I had to find a way to make Dojo work for ME and my students. Most importantly, I wanted my students to earn points for making good choices so I could reward students for the good things they did. (That PBIS idea coming back again.) I did not want to keep resetting points nor I did not want to focus on negative choices. My goal was to communicate with my students AND parents in a positive way.

I came up with the idea “redeem” Class Dojo points for specific rewards. (I did this with my clip chart previously.) First, my students generated a list of the types of rewards they wanted to work to get. Their list of rewards included:

How to Set Up Rewards On Dojo

Next, I set a point value for each reward. I set each reward in denominations of 5s. When the class and I went over each reward and point value, we also talked about the rules. Here was some of the rules we set. If you get to take your shoes off in the classroom, you must have socks on and you have to know how to tie your shoes to get them back on. (Motivation to shoe tying was a welcome side effect here!) If you get to choose your iPad game, you only get to chose that activity during Daily 5 or Literacy time, not all day. Your stuffed animal has to stay in the classroom and it must fit in your cubbie so it can go in your cubbie when we are leaving the room. The most important rule was that you could only cash out Dojos in the morning. This was huge because if a student earned enough Dojo to take their shoes off after lunch, some children would want to run to put their shoes by the door in the middle of a learning activity.

Then, we posted the rewards and their values in the classroom as well as in an email to our parents. Everyone knows the rewards and how much they “cost” to earn. At the end of that school week, I did not reset Dojo points. Instead, starting on Monday morning, students were allowed to redeem their points they earned. I made sure my parents understood that loosing points may mean that their child in redeeming points, not getting into trouble. 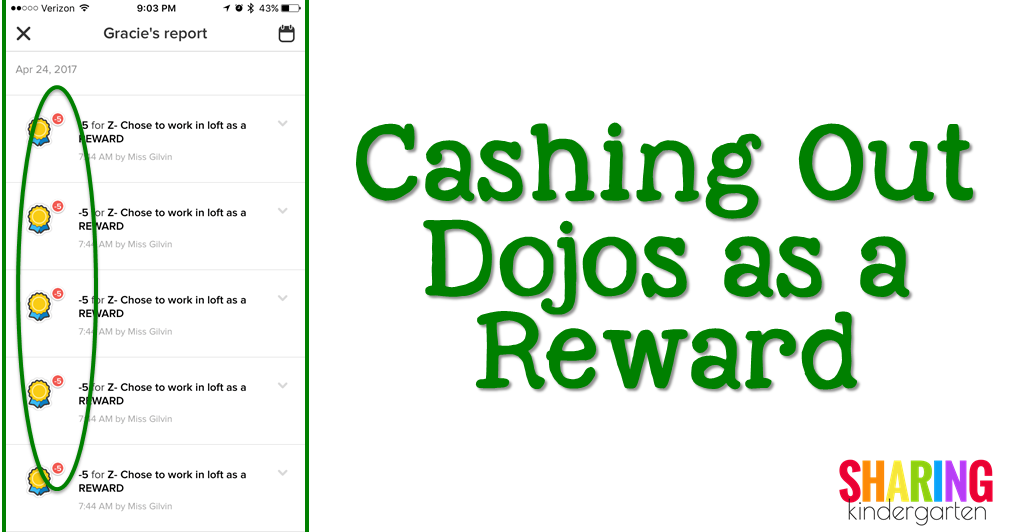 How to Set up to Redemption Points on Dojo

Furthermore, I also had to go into Dojo to add spots to take away points per reward. I used my computer to go into Class Dojo and under the “Needs Work” category, I added the reward spots so the app would deduct points. Dojo puts their titles in ABC order. I added a “Z” to the front so these areas would go at the bottom. I also added the word “REWARD” in all capitals so parents would know this was a reward cashing out and not a punishment. Dojo allows you to place a value on points earned or lost from 0-5. Since all my point values were in 5s, I gave each of these a -5 value, the maximum allowed from Dojo.

In my classroom, students redeem 15 points to choose their own iPad game. Since Dojo allows a -5 at a time, I have to deduct 5, then deduct 5, then deduct 5 again to show this value of -15. This is slightly a pain for the teacher, but that is the best way I found to make it work. I do reset points so students can save up for something bigger or cash out points often for something smaller. You can see the image above for working in the loft cost 25 Dojos. You can see how it shows up for the parent. 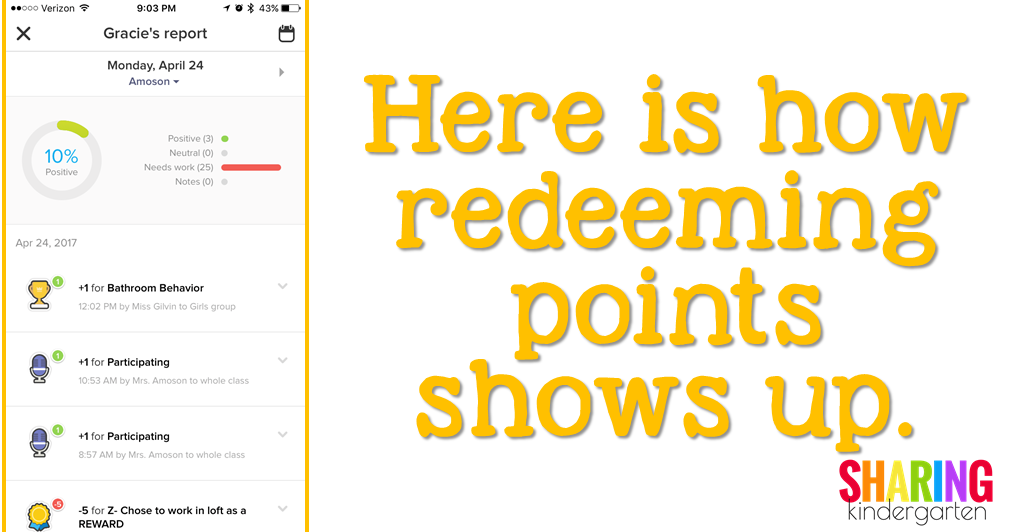 Best yet, I noticed there is no longer a stigma with Dojo points! Well behaved students could have 100 points if they have been saving up or zero points because they just redeemed theirs. Students who struggle with choices are not singled out either. I hear many students encouraging others to get to the point value that student set as their goal. I have also seen friends helping friends make better choices so that friend can have the same reward they have. (Think about those chatty kids who sneak to talk who now try to quiet down their best friend so they can both take their shoes off at school tomorrow. Also think about those rough students who like to wrestle around encouraging their friends to stop before anything starts.)

I hope this tip helps you to use Class Dojo like never before! I hope it creates a great atmosphere for your students, their parents, and yourself.

** Please note. Classroom Dojo NOW has a “redeem” option.
I like this option, but parents can’t see this feature so it can be confusing for parents.
Here is how you can do this!