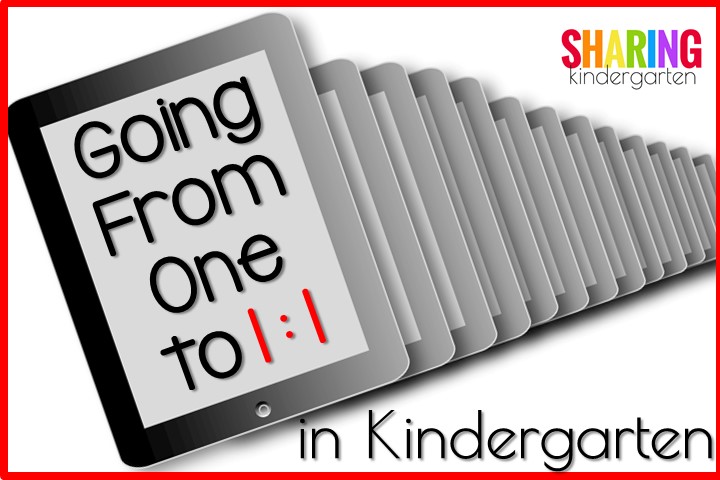 Every teacher travels a different road when it comes to their technology journey. I am going to share with my technology journey that started with one iPad and grew to 1:1 devices this school year. This is the first part of my journey.

I got my first iPad several years ago as a gift from my spouse as an expensive back to school gift. I was blown away by it and what opportunities it held. Yes, I was equally impressed by the cost. This one thing cost around $400! (That was a 16 GB iPad 2 several years ago mind you.)  I had one but what could I do with it? How could I get my students on it and engaged using it? I only had one device. 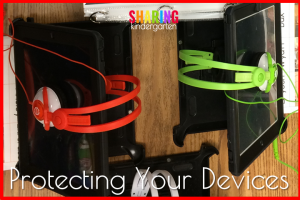 I quickly got a cheap cover for it, which was my first mistake. Next, I got a shell for the back and the flip from cover. It also broke within a month and my iPad screen was cracked slightly on the corner due to a student dropping it by accident. This was a huge lesson. Don’t hand little learners an expensive device with a cheap protection case. And when I did the math, the shell for the back, the front cover, and the screen film were all over $60! Let’s not pretend those screen films are fun or easy to put on. And my little learners LOVE LOVE LOVE to pick at them as well.

My solution was a GOOD case that came with a protector for the screen! I highly suggest spending the $40-$60 on an iPad Otterbox Defender Series case or a LifeProof case. Personally, I started with Otterbox Defenders and I have been very pleased with the results over the long haul.

I also had a lot of questions. My first question was… how do I get my students to use just one device? I really didn’t want to be the kind of teacher that got an iPad then solely or mostly used it. I already had an iPhone, so I didn’t think controlling the iPad would be in my best interest. But HOW?

I used the iPad with one student at a time. It was tedious. Each and every student in my class wanted a turn, but they all had to wait. I would pull a child over during our “rest time” and show them what to do and how to do it. (Remember this was years and years ago.) I quickly learned the value of headsets! They are a must. One student would interact with learning games on an iPad while I assessed another student. Then, the students would swap. I take a class list and cross off both students names so I know each one had  turn on the device and was assessed. 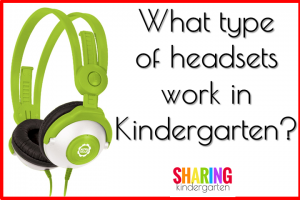 I started off purchasing the cheapest headsets I could find. That was another technology mistake. Cheaper for 5 year olds is NOT better. We broke the cheap headsets quickly. Through trial and error, I have discovered great headsets over time. My current headsets have lasted me over 5 school years! One randomly stopped working and the company quickly send me a new one. My recommendations goes to Kid Gears Headsets. They provide headsets with a variety of colors and the durability to last in a Kindergarten room.

More so, I also learned to put use good quality apps to help with my RTI strategies. I could easily modify simple games to their needs and skill they were working on for easy data collecting. I could also work on handwriting was also a weakness so I used apps like LetterSchool to help with that.

How does this look in the classroom? One student would come into class from breakfast and play a phonics game and handwriting app for a few minutes, then go to his morning work. By that time, my higher ability students would be done with their morning work and could go to the device to play a game on their level. Again, I would try to be as fair as possible. I would use that same checklist to make sure I evened out turns as much as possible.

Going From One to Two

I was soon able to gain a second device. This is when I really learned a few new lessons. With some apps, my students had their own account or game. This meant when they went to the newer iPad, their progress wasn’t on there. And how could we or would we tell the devices apart? I started color coding and labeling my devices. Plus, somehow I had to keep up with who would and should use each device. If your class is split equally with genders, that is an ideal way to start. Boys use one and girls use another. If you number students, you could have students 1-12 on one device and 13-24 on the other.

When I started pulling students aside now, MORE students could get to work but it also required me to know which student goes to which devices. You can add a simple class list to the bottom of each device to make your life easier.

Yes, all my students wanted an iPad as often as they could. Yes, some would get mad if they didn’t get their turn. But my chart assured me that each student got a turn about once every two weeks. I know this isn’t idea or perfect, but this was that worked for us and got my students on the technology that we had.

At this time, my county and school did not have an iPad or technology policy. This meant that… well… anything could go. I asked parents for iTunes gift cards to purchase apps and many of them were very happy to help provide them for our classroom. I kept parents updated with our classroom apps on our newsletter.

Apps For Classroom Use

After purchasing apps to try with my students, I found many apps were just plain bad and several that were awesome. I discovered some apps were open for all students. Other apps have student accounts, which caused issues when I had two devices and 24 students because most apps only allowed for 3-4 student slots per game. (If this is an issue you are having, look into Teach Me Toddler, Teach Me Kindergarten, and more in their series. They allow up to 40 student slots per device!) Hooked on Phonics also has a Classroom App. 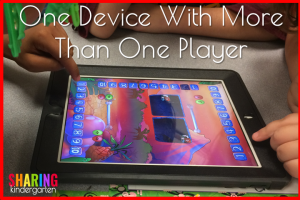 Apps for More Than One Player

I also discovered some games would allow several students to play at one time in a multiplayer format. This was a HUGE help with only having a few devices. Apps like Targeting Math and Counting Together are ideal for classrooms with limited devices. Over time, many apps and their companies, have been getting better and better. The cost of these apps has gone from 99 cents to upwards of $10 per app. BUT you are getting more and more with these apps now. And honestly… a good app is worth a few dollars.

There is more to this journey of going one to one…
as this is just the first part.

Check out Part 2 by clicking here: 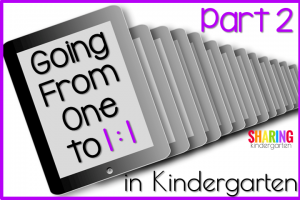