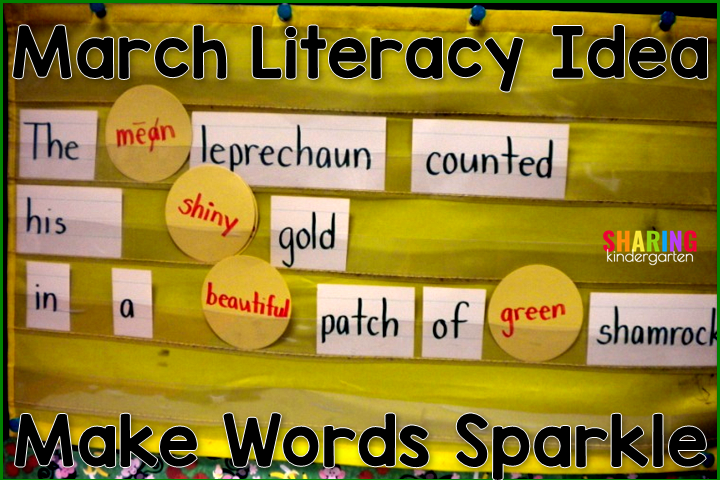 Here is a fun St. Patrick’s Day Literacy idea using a pocket chart that you will love for the month of March. You can even take this idea and change it for other months and themes.

This idea is a fun way to integrate literacy into the month of March. It is a great and FUN way to work on vocabulary, describing words, and even expanding sentences for writing.

First, take a themed sentence and write it on a sentence strip. You can see our example uses the basic sentence, “The leprechaun counted his gold in a patch of shamrocks.”
Next, cut it apart. I like to use this idea to work on adjectives so I cut the sentences apart before the noun, since this is where adjectives typically fall.
Then, add a few die cut shapes. Most schools have die cut machines, so these should be cheap and easy for most teachers to get. Since I picked a March themed sentence, I chose to die cut circles for gold coins.

How to Set Up

Now, add the sentence strips to a pocket chart and add the die cut pieces to the blank spaces in front of the noun.
When the students are together, have students read the sentence with you. Now, we break it up and stop before each noun. Then, my students add “sparkles” to make the nouns shine!
This means we add describing words for that noun. We give each word several “sparkle” words in front of it. Then we reread the sentence adding and changing out the sparkle word. This is also a great chance to change your expression while reading the sentence several different ways.

Modify This for You

I originally got from somewhere else, but that I now do all the time! My class LOVES this and it meets the needs of so many different types of learners. You can change the sentence, change the theme, change the topic, and all of these changes spark interest for your learners. This means this idea does not have to be JUST a St. Patrick’s Day Literacy idea.
Finally, students can take these sentences and describing words and use them in their writing journals to write awesome sentences and draw illustrations to match. 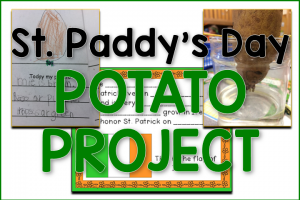