I am going to share with you some FUN and hands on way my students are practicing math skills, writing skills, and learning about space. I also have a /sh/ freebie for you guys. So hang on, hold on, and get ready… because my digital camera decided to work today so have plenty of pictures to share with you!
1. We work on addition skills forever in K. I class LOVES to use their fingers which drives me insane. But a few of my little learners refuse to attempt mental addition at all. This got me thinking… perhaps they just can’t “see” how to do this in their minds. So, we worked on making sets of ten using manipulatives… then we took the away the manipulatives and worked with just the numbers.

We used these ten beads (like 10 frame) bracelets to create sets of ten. We also used a cup with ten two-sided counters, a dry erase board, marker, and eraser to play a FUN game of addition. Students had to work in sets of two to shake, dump, and sort the prices. Then they had to add the yellow and red chips together.They had to write their math equation on their boards.
I also did some intro to algebra skills here and my kids ROCKED that as well. Since we knew the answer was going to be ten each time, I left one of the number of the equation in the problem, but marked the other as a big “?”. My students were able to use manipulates to come up with answer!
2. We have been working on expanding our writing into three sentences.During Daily 5 today, we used this prompt in small groups to write facts about the Earth. 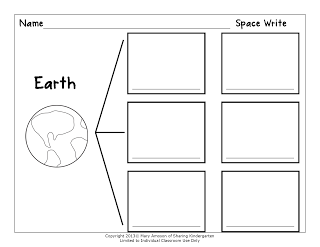 Then, we expanded this Write Me Three format into three sentences. Here is the work I captured.

Here is a glimpse of the FREEBIE phonics sheets {standard font here} and {D’Nealian font here.}
4. And last, here are the links to my Space unit (which has the Space Write Me Three Activities) and /sh/ Printables pack in case you wanted to peak at them. 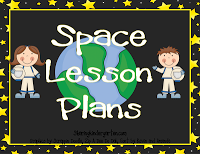 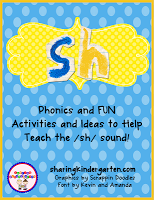 Okay, that was a LONG post and a LOT of stuff…